How we can help → Enablement Centre → Personal Stories

Get our RSS feed

Life After My Stroke – by Chris Banting

I had 2 strokes in February 2010 when I was 29 years old and it left me with a right sided weakness, aphasia, memory loss and fatigue. I also have a condition called atrial fibrillation, a fast, irregular heartbeat, and throughout 2010 and 2011 I had 2 heart operations, a pacemaker fitted and a cardioversion. 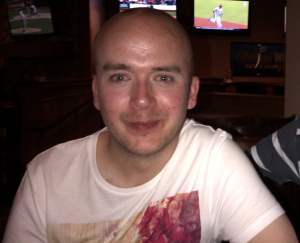 Before my strokes, I was outgoing, full of life and out with my friends and family most of the time. After my strokes, I can only use one hand, I walk with a limp, I’m very quiet because I have aphasia, I have to manage fatigue and I’m at my flat most of the time. I’m using a WalkAide (a functional electrical stimulation unit) to help me with walking because I have drop foot – without the WalkAide, I would fall over. Almost every day, I do exercises to help me, such as an exercise bike, a Bioness Ness H200 (an electrical unit to help me to try to use my right arm and hand), weights and a variety of other things.

I first knew about Headway because a friend who also had a stroke  told me that she was going to Headway and I should look into that. So, I went onto the internet and found a lot of information and I was intrigued. My Dad called Headway Gloucestershire and we set up a meeting early in 2012, and from there I go to Headway every Tuesday, and it’s so worthwhile.

All the staff, volunteers and the people who’ve had an ABI are so friendly and patient and it’s just great to meet up, share stories and do new things. There’s cookery, woodwork, literacy, an art room, a communication group and much more. In addition to that, the staff always helped me to fill in forms, providing courses such as ‘Understanding Brain Injury’ and they’ve just helped me with so many things.

I was a bit nervous on the first day at Headway but over time it’s helped me to improve my confidence, I’m not as quiet now, my speech is getting better all the time and Headway have referred me to The Pluss Organisation (a specialist agency to help people with disabilities look for work again), and hopefully I will get a part-time job soon. So it’s all positive steps in the right direction.

Headway Gloucestershire is a fantastic organisation and they do amazing things, and I just thank everyone who’s been involved. Stewart worked as a self-employed pipe fitter. In 2003 he fell from a ladder, was unconscious for 10 minutes and admitted to hospital. He was discharged soon after because he appeared well.  When he returned home he was unable to cope but did not understand why. He had short-term memory problems, dizziness and balance problems, brain injury fatigue and back pain. He developed extreme anxiety leading to agoraphobia and was no longer able to work.

Stewart felt that he had lost his status, identity and independence and became very low.

A community support worker referred Stewart to Headway. We visited him at home every week to provide brain injury recovery advice and help him identify strategies to manage his symptoms.  Over time we earned his trust and worked with him to overcome his anxiety and fears.  Within a few months Stewart came to look at the outside of Headway House and with small steps over a few months Stewart began to attend our Enablement Service.

We worked with Stewart to help him manage his anxieties and introduced him to other survivors until he was able to lengthen the time spent with others at Headway. We accompanied him to hospital appointments and helped him to apply for benefits. Stewart identified his own goals and we worked alongside him to support him in achieving them.

“It turned out to be my lucky day when I was pointed in the direction of Headway, this was more than eight years ago. I have attended every week since then. I cannot hope to explain in words how much the people at Headway have done for me personally, I have been encouraged and cared for from the very first day I arrived.  We now have a lovely new building with wonderful facilities that we all enjoy, you will not often see a face without a smile on here, there is always someone willing to listen, trying to explain or offering help. We all look forward to our days at Headway”.